If you’re a weapons enthusiast like me, you may be wondering to yourself – how do I know the weapon I am purchasing is the most effective on the market? Before making a purchase of any weapon, I spend hours upon hours researching previous customer reviews on different products, making sure that anything I spend my hard-earned money on is going to be effective at doing its job.

One of the biggest weapons I am asked about is stun guns – nobody wants to buy a stun gun only to figure out that it doesn’t work (usually at the worst of times!). Stun guns can be an essential tool in protecting yourself when you’re alone.

So, which stun gun is the most effective? From my research, there are a few models out there considered to be the most effective. Our personal favorite is going to be the Vipertek VTS-989 stun gun. It’s priced well, bares quality features, sturdy, and has a proven track record.

If you’d like more information on the purpose and effectiveness of stun guns, I encourage you to look through our site and read up.

What Is A Stun Gun?

A stun gun is a weapon similar to a taser, which uses a series of electric shocks to stun and immobilize the victim. They are used by both law enforcement officers and average citizens for self-defense, and are sold on many websites online, as well as at several stores in person.

It is used by pressing the stun gun directly against your victim and pressing a button, which then shocks the victim. The longer you hold the button, the longer the person is shocked, and the more temporarily debilitated they will become. They can even be bought in connection with cell phone cases, making them well disguised as weapons!

What Is The Difference Between A Stun Gun And A Taser?

Although these terms are used interchangeably, they are actually two different types of weapons. Stun guns and tasers are both non-lethal weapons used to supply electrical shock to the victim they are used on, but a stun gun must be pressed against the person directly, while a taser can be shot from up to 15 feet away.

This makes tasers better options for attackers at a distance and more preferred by law enforcement officers. Stun guns, however, are better hidden and concealed than tasers, and are good for sudden, up-close attacks. Here’s a video below demonstrating potential usage of a stun gun:

What Makes A Stun Gun More Effective Than O?

Stun guns can be deemed effective based on the voltage and amperes they contain, meaning how strong the series of shocks that are administered to the victim will be. However, stun guns can also be deemed effective based on size and ability to conceal the weapon for safety. For the sake of this article, effectiveness is deemed on strength of the weapon, although ability to conceal will be mentioned.

The higher the voltage or amps in a stun gun, the stronger the shocks the weapon will give off. This also means stronger and longer paralysis for the person being stunned. A stronger stun gun means a greater chance of escape in a sudden attack – who wouldn’t want that?

What Are The Best-Rated Stun Guns On The Market?

For the last several years, stun guns have gone higher and higher in voltage to appease the public – now even promoting a 3-million-volt stun gun! However, it’s not all about voltage – higher miliamps mean a higher output of shocks as well.

TBO-TECH sells a stun gun called the Runt, that has such high amperage that the voltage output measures up to 20 million volts. The Runt is a bestseller with dozens of five-star reviews, some even saying that the small device left a mark on an attacker through three layers of clothing.

Another great option is the VIPERTEK VTS-989 – it’s a bit larger and harder to conceal, but it has several million volts, and even has a flashlight and wrist strap attached to it.

If you’re looking for an effective, concealable stun gun that doesn’t sound too scary, however, your best bet is probably the VIPERTEK VTS-880 Mini Stun Gun, which is a smaller and compact option. They come in several colors and also have a flashlight, making them a great option for women who find themselves alone often.

Where And How Can I Find Effective Stun Guns In My Price Range?

There are several different websites online (some as common as Amazon) and stores in person that you can browse for weapons in your own price range. Many people at these stores are also available to answer any questions you have, so that you find the perfect weapon for you at the perfect price. Check out Cheaper than Dirt for some more options as well.

So, which stun gun is the most effective on the market? From my own personal research, I find that the Runt is the strongest stun gun available for purchase online. 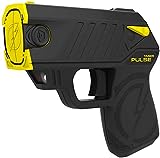